Another nice Kermis, lots of climbing (for Belgium) and I made the most of my "climbing" legs. I had somewhat of an allie in the peleton with Daan Soete, I had trained with him earlier in the week and he is a good friend of Quinten. After trying to burth that magic break from the peleton it seemed obvious that he and I were the strongest, or perhaps most willing, to deliver this break. After 50km I had been in a few little moves that lasted for half a lap at best and I was begining to lose hope. I knew the best chance for me was for a few riders to have maybe 10seconds at the top of the climb so I could use the climb to slingshot up to them and then drive the pace. Luckily with 6 laps to go this scenario presented itself to me. I bridged followed by a few strong riders and we were a lead of 6, driving. Our lead seemed tenuous and with just under 4 laps to go our break sat up with a charging peleton only meters behind. I thought of the old cycling tactic in this moment that Nat, Rick and my Dad have told me before "attack where no one will expect it". So what could be better than when all your compatriots have given in to defeat and you have a 10m gap... attack! So I did and it didn't seem like it would work, but we soon had a little more than 30 seconds. We nearly got caught again but a single rider bridged across and increased our fire power. Once we realised we were away for good with only half a lap remaining I had to finalize my plan to get the dubya. I was confident with my sprint being in a group of small guys, but I was a little more confident with my climbing. On the 900m 6% grade climb I dropped into the 14 and gave everything. By the top I had about 75m and I gained very little more over the last 2km of gradual downhill. I then tucked in my jersey and saluted for the win. An excellent race, with a course that has suited me like no other I have raced in Belgium. This leaves me with a record of 4 kermis's raced and 3 won, today I go again for the flat course in Geel, hoping to improve my winning percentage to 80%!

Thanks again to my sponsors @ SpinSanityCycles! More and more compliments on the bikes everyday. Life is good. 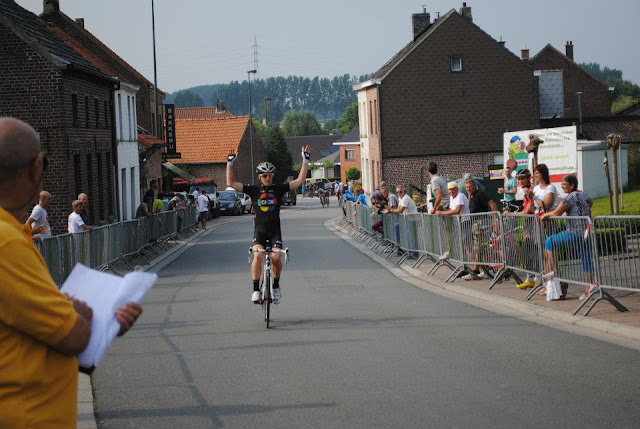 Posted by Benjamin Perry at 1:31 AM