As always an awesome atmosphere (mad alliteration) at the Toronto CX weekend. Saturday night was a Citizens level race with a fast field racing under the ski lights and sunday was an s-cup, slightly more stacked field, in the day.

Night
I got off to a great start being about 5th wheel after the whole shot and with one lap full gas it was myself with Peter Morse and Peter Mancini with a Wagler and the Norco Duo of Zach Hughes and Andrew Watson ahead. We sat a few laps in this order until Mancini fell off our pace, not long after I launched an attack on Morse and started to make my way up to Wagler. He said after he made the mistake of waiting for me when he saw I was going to catch him, the reason this was a mistake was because I didn't stop for a chat and attacked him immediately. About 3 laps left I had 15seconds on him by the hill with Zach Hughes 20 seconds ahead according to my dad. In the same spot the following lap I was only told my split to Wagler, which hadn't changed. This made me realise Zach was really pulling away. I gave a huge effort with half a lap to go to secure 3rd place, my first podium in the Senior 1 category! Hoo....Ray!

Day
Day had a similar start, I was 3rd wheel after the whole shot and maintained it for a while. I passed Erik Box to move into 2nd and started to pursue Zach Hughes who was gaining time on Erik and me previously. I kept him at the same gap for a while and eventually after 2 laps or so Adam Morka, who'd had a bad start, caught me and dropped me easily. I kept going until a little mishap, a small crash where I nearly hit the deck but managed to stay on  my feet, I got back on my bike to have Nathan Chown right there with me. We rode together taking turns pulling for a lap and Erik Box who was really close to us never managed to catch us. Coming into the last corner I sat 2nd wheel forgetting how short the straight away was and Nathan easily maintained his spot and got the final podium place. I am happy with 4th anyways, but I look to improve on it next weekend in Barrie. 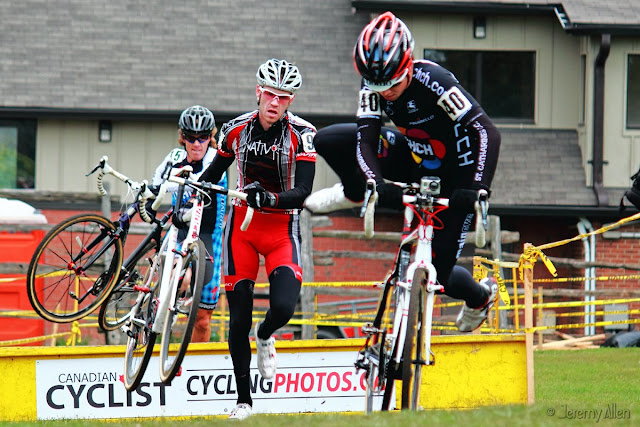 Here is a Video I made with my buddy's hero cam.
http://www.youtube.com/watch?v=RvXuQ3e4CeA&feature=youtube_gdata
Posted by Benjamin Perry at 7:51 PM