My first race in Elite was the KB race, where I experienced some good technical problems. Right before the start we (my dad and I) realized that my crank (which is shredded) wouldn't be capable of remaining on my bike for much more than a lap, which is a problem. So instead I started on Lesley Chown's spare bike. About halfway through the race my rear derailleur hanger fell off. I have no idea how this happened as I was going slightly downhill, by the time I ran the km or so to the pit I was way back and didn't make up many places on my soon to be crank less spare Kona. I learned how to have technical problems and change bikes, not bad.

My second race was the Barrie Cross where I for some unknown reason just cracked horribly, I almost passed out and I slept the whole way home. I got as much sleep as I normally do, I guess it was just an off day. I was doing well the first half of the race but then I just faded completely, it was a similar feeling to the last 2km of GMSR earlier this year, but that was diagnosed as lack of food. I learned how to keep myself from passing out on my bike.

My final race just this past Sunday was the Riverdale Cross OCup Finale. I was feeling great for the first 3/4 laps then my legs just gave out and I lost the group I was in with all the big guns sans Staffman who was already up the course. I think I would of done better if I had a little ring in oppose to my single as the course was quite hilly and muddy. There was a heap of crashes in this race and all of which were completely INSANE, including my own. The first crash I saw was a guy in green riding beside Box just after the start. Box hopped up on to a path and green man was on his wheel when Box hopped he was cut off and instead of following the path of Box he just slammed his breaks and ate it, crazy decision in a split second, but it's hard to think that fast. The next one involved me. A mountain biker I hadn't heard of named Cameron Jette came up beside me and bumped into me and just like imploded at the instant of making contact with someone. He turned out to be super fast by later catching me and passing me. He was great at turning and had awesome balance. Its hard to believe MTBer's can ride huge rocks at top speed but can't be bumped a bit. My crash was the dumbest. I was going around a corner onto a straight away and looking for the hardest path I didn't notice the split tape and snagged it and went down, hit my knee really hard and I am still feeling it now but it doesn't hurt. I wish I could have finished but it wasn't really feeling to be worth the risk at that time. It's too bad because I was really starting to feel strong again just before this crash. I learned that looking where I/other people are going is probably a good idea. 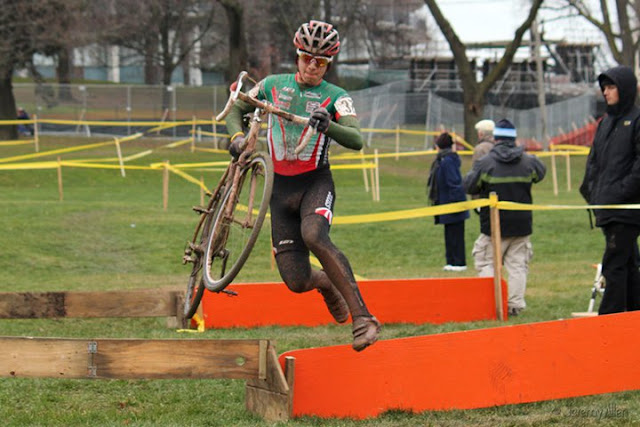 I hope to update my blog weekly, YES WEEKLY, when I go to europe in January. So Justin Henri has something to do.
Posted by Benjamin Perry at 1:54 PM