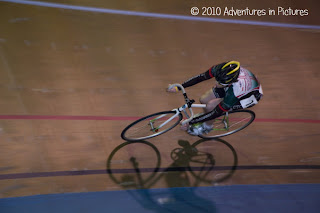 If you read my previous post you already know that I went into this race with low expectations. Out of the 10 rider field all the racers were hardcore trackies who have been going hard since november excluding one guy who no one had seen before. My bike was a big problem because in track talk it was a 96 and the suggested size for my age is 88 or so (bigger the number harder it is to pedal). The first race was the 2000 meters where I was about 5 seconds behind the winner (which is a lot) Kris O and only 0.13 seconds out of 3 who was Will Simonds, (a flash back to the morning) I looked at my aero helmet and said to myself.. " nah, I don't wanna look like I know what I'm doing and come last", so I left the helmet. That helmet would have given me third place (according to justin zottl) and one less point for the omnium (less points the better in track). I would later get my revenge by beating him by 0.16 in the 500.  Then a reasonable wait of 4 hours until the 500m TT. So Kris O invited me to go with him to Subway and wait it out. We got back to hear about the 2 hour delay and we just continued to chill at the track. My 500 kinda sucked and I wasn't to pleased and I also stopped a little early not knowing of the finish line change. I didn't like it very much because due to the delay they did 2 up TT's so my good friend and partner in the TT, Adrian George, got to draft me the whole time then pass me at the finish, but it doesn't matter because this race is of minimal importance. So later Daniel Mackensie-Picot got to go alone because he had a mechanical in his first try which also isn't completely fair but I really didn't care I was just there to have fun. So after another 2 hour or so break we were getting ready for the flying lap which Kris O kept telling me was his race and his event. He didn't lie! he got a 8.2 second lap and won! I'm pretty sure no one in any category beat him. I got a 9.147 lap which was the EXACT same time as Adrian we each got an extra .5 points due to tying. That was pretty nuts! After that we all did the best race of the day (in my opinion) the scratch race. The rules are if you get lapped your off the track. So I attacked on my first three pulls and did some damage, causing the group to shrink to 5. I heard some yelling going on behind me, which I found out later was because Daniel Mackensie-Picot WOULD NOT let anyone else on my wheel just in case of my escape. After a couple laps at a very slow pace I looked around to see what was going on, Kris O (sprint man) was pulling and giving himself a break. So the race continued on like this: I attack, chased down by sprinters, sprinters pull at a crawling pace, and repeat. It was the most fun I had all day and crazy because I was the only endurance rider and everyone else in the pack were sprinters so I could feel all 300 eyes on me waiting for my next attack and Rob Good's voice cracking while yelling 16 year old (but I'm actually 15) cadet Ben Perry from St.Catharines attacks again!!! So I came third in that race and held off the only two people who could take away my sweet trophy (Adrian and Will). 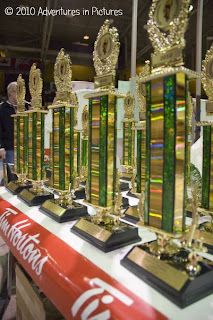 Afterwards I talked to all the of ontario's big guns Mateo Dal-Cin, Ryan Atchinson and Denise Kelly. Then I went on the podium, smiled for the camera collected my Tim Card and went home. Twelve plus hours at the track for less than 10 minutes of racing and 30 minutes tops on my bike. Thanks to Jeff Poulsen (below, right) for driving me to the FCV again. 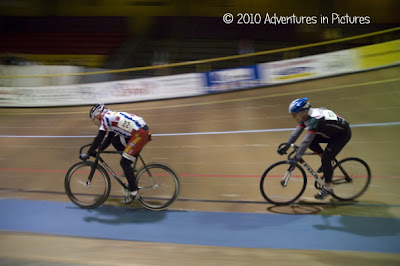 Posted by Benjamin Perry at 4:58 PM