(Un)lucky (in the) break(s), Flanders this Saturday!

The weekend of March 30th and 31st I raced back to back kermis races. Early last week I was finding myself a little sluggish so I was instructed to take 3 days off, this allowed me to avoid overtraining and go into the weekend fresh.

Saturday was in Wallonie and on a excellent hilly course with tonnes of corners and obstacles. Early I had my teammate Dimitri start the breakaway and my one other teammate and I took turns covering moves to try to get across. He made it on his turn to follow an attack and after a few laps the break had swelled to a sizable 11. With the British Academy team and my Lotto boys taking up half the field it didn't look like anymore riders were going to go across. I did my job for the team but honestly I would have liked to be there. Once the gap to my teammates was big enough I tried to animate the race for my own benefit. I did some attacks on the major climb but it would always come back together on the impending descents. Then with 2.5 laps to go a Brit did what I had been doing and sitting in his wheel at 450watts no one was going to come with us. A lap later 2 more guys caught us and with half a lap to go another young Brit jumped up to our quartet on the climb to set us up for a 5 man sprint. Just like my last 5 man sprint I contested I was 3rd, hardly holding of the guy behind me. If you haven't already done the math with both hands and four toes aloft I was 14th at this hilly Wallonie kermis.

Sunday was good. I felt decent even with a 3 hour hilly slam fest the day before and the course had a little shallow hill which I found encouraging. Lap after lap I tried going in moves but t'was no avail. I held court with my 4th year teammate who was also racing and he said "don't worry, it will be a sprint". I also sought out my other teammate and I asked him what he thought and he told me he was waiting for a bunch finish. Of course a break goes and 15 guys stay ahead and win by 5 seconds, nuts. I tried to pull them back for my one teammate, I got the gap pretty small on the flat roads atop the climb but I went until I was gassed and when I pulled off no one was willing to take over. with less than a km to go and a lined out peloton I drifted in for 43rd place.

Not a half bad weekend of racing, I was playing a little bit on the conservative foot which isn't my natural way of handling a bike race. It really let me understand how you have to be quite concise to get in that right move. I am slowing moving away from my go to brute strength shotgun approach I used in junior.

This Saturday I have been selected by team Canada to race the Tour of Flanders! I was sure I had all my gear dialled but then I remembered I had 21mm tubes on my wheels.... those do not work well with cobbles. I spent 100euros on some incredibly reasonably vittoria pave tires and I now have the ultimate set up. Two classic specific Ridley Fenix bikes and a race bike with cobble specific wheels and tires, everything works out in the end. Wish me luck, it's going to be a chaotic one. Hopefully my hands heal in time for me to write a post race report.

Last thing, if you are in Dundas, or even, if you live within an 32hour drive of there (as of April 4th @ 12pm) get going and check out the Ridley bikes and Domestique Coffee at the Dundas Speed Shop as they are having a Belgian night... and all the profits go to support Ryan Atchinson and I. We are two boys from the O racing in Belgium! Oh Canada. 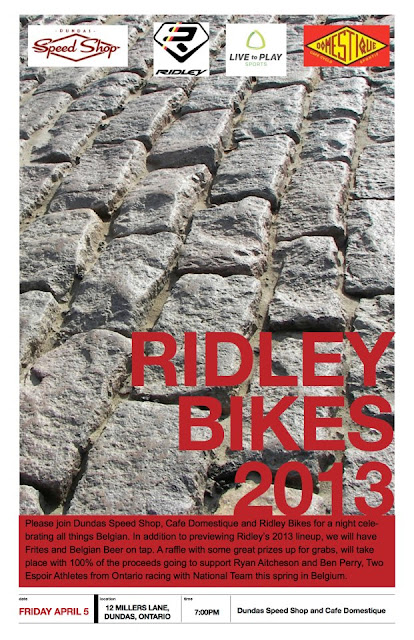 Posted by Benjamin Perry at 9:54 AM