Probably the best weekend I have ever spent on a bike, it was hard, I did suffer, but thats the name of the game. Four stages over three days, one of which being a team time trial. Coming into the race I was less than optimistic, none of my teammates where expected to finish the whole race and after a poor showing at the Trofeo Karlsburg months earlier I wasn't sure if I was ready for this level of cycling yet. That level being all the big names in Junior Cycling. The Danes, Dutch, French and Belgians sent club teams to finalize their ideas for the worlds, Australia's two big guns where there on a dutch club team and the Norwegian, Russian and French national teams. A peleton of almost 200 riders sent out to tackle the hardest climbs of the Liege region, home of "la Doyenne", Liege Bastonne Liege.

Stage 1 I was nervous in the peleton and afraid I would get dropped on the climbs. I really sucked in the pack. We reached the first climb and I had manoevered myself into the top 30 riders or so just to do my best to stay in it. I kept jumping around riders who were begining to get gapped until I was 2nd wheel! Sure it was a hard climb, but I wasn't dead, far from it. A few guys came by me before the summit, in search of KOM points, why bother I thought. After another little climb Mads Pederson (nations cup leader) attacked and they stuck to him like glue, most of the peleton was dropped, I felt great and decided "why not?" and went for it. A Russian and Norwegian followed me and we began to press our advantage. After 10km 6 more riders bridged up to us and with 20km over 2 city curcuits left we went all in. Our gap grew to nearly a minute as the peleton began to splinter. I knew with organisation from the duos of Russians, Bretagne (french club) and Russians in the break their series of cat and mouse and negative team tactics would be hard to face being alone in the break. So naturally I attacked on the climb. I knew the climb was a Category 1, probably around 2km at 10% or something like that but that mean't mountain points, more than the last KOM which was a Category 2 so I scooped them up and was certain I must have the jersey. The new Russian and original Norwegian rider's bridged across to me and on the flats so did a Bretagne. We all looked at each other and then the Russian attacked, no reaction and I decided this opportuinty was too great to let go and I chased him down. Thankfully it was 90% downhill in these final 2 km and I was looking the freshest of the group from what I could see. We quickly caught the Russian and with 500m to go it came to a sprint. I rode up the right side and waited to see who would go first . The Bretagne rider and I went clear of the other two and for what seemed like 10 minutes in slow-mo I rode beside him, half a wheel back.

I thought "Okay there where no intermediate sprints and it's stage 1, he's in Yellow, I'm in Green by default" No Green Jersey. "Okay well I won 1/2 of the KOM's what are the chances of someone being in both the break and the head of the peleton?" Apparently good enough. "Okay well atleast there is still the podium and flowers for a top 3". Only the stage winner gets to go on the Podium, with the jersey holders. (curses)

The Brightside to this atleast is that I had achieved a new confidence in my abilities. I am strong enough to ride in the front, to attack. I can go for Yellow! not the "Latern Rouge" as I thought going in (last finisher).

Stage 2b came later in the day and 4 KOM opporunities were layed out before me. It soon became clear with our assult of the first climb that 6 riders were hunting the maillot a pois. I came 2nd on the first climb. 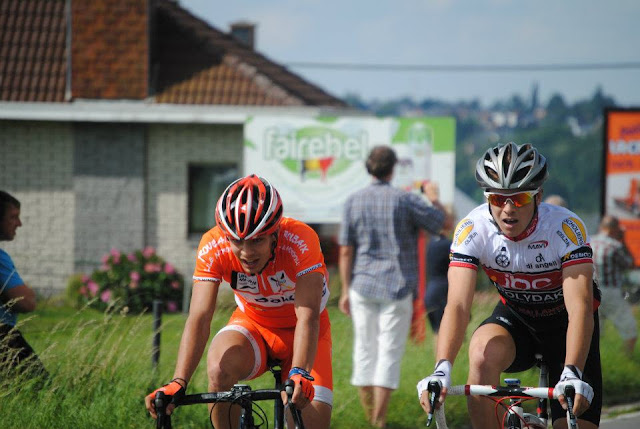 I won the next one attacking a few hundred meters out. The third KOM went to a short lived breakaway attempt that started a few km before the base of the climb. I picked up the 4th and final climb in a close bike throw against a strong Dane. We had gapped the feild to such a point we started rolling and an Aussie bridged to us. We spent nearly 10km away, half of which I spent 50m dangling off the back... idiot! I messed up on one of the corners on the descent and the 2 up ahead had the ability to shake and bake,by myself... I did not. I had to spin like hell and hope to be close enough on the next climb to bridge across. I did but I was quite gased. The next time up the KOM climb (no points this time) I saw 8 or 9 riders coming close. My legs were still crap and holding on was real hard. I "let go" and let myself jump on the train of riders coming across and then glided back up to the 2 leaders on the decent. Sadly our cute wittle group got caught with 2km to go and brought an excellent junior sprinter with them. He chased every attack and won the sprint in his little ring. I tried so hard to stay right on his wheel in the bunch I managed to box myself in and rolled in helplessly in 20th or so. But I did enough to get the KOM! yay! :) most people who were going for it didn't register any results on day 1 so I had a 23 point lead on 2nd place with numbers 2-6 all around one point away from each other. 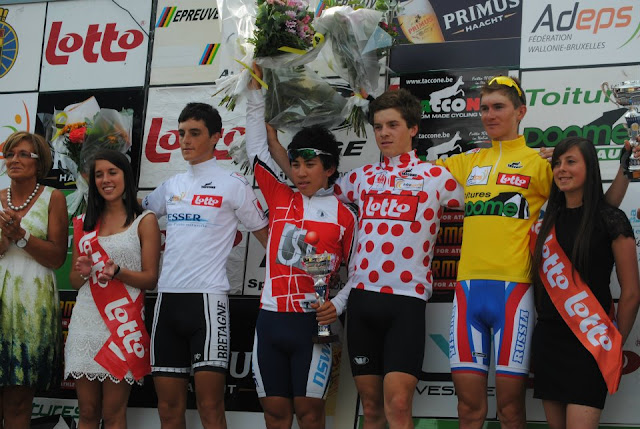 Stage 3 covers 7 monsterous climbs and in the pooring rain too. I had hoped with my lead in the GPM I had forced the others to surrender. Early on some riders had some goes but I marked everything and then pipped them at the line. I knew I had the jersey wrapped up and stopped going to hard for it and focused on the finish. We soon decended a crazy decent and with my new found skills for pack riding I was chilling in the top ten when we began the Gnarlist of decents. This is how it felt..... Downhill.Breaks on full, one foot out godverdomme it was crazy. I didn't look back but it sounded like a car getting crushed at a impound lot! At the base I looked back and it was still only us 10 with a string of riders in tow. Now all I had to do was be smart and wait for the finish. Mads Pedersen attacked again hoping to not finish 3rd overall (the worst result of his life probably) and I jumpped on we soon had the Danish champ and his team mate as well as 5 other riders in our group. People where tired and only the five of us really pulled. The three behind kept messing up the flow so I just rolled through easy, not really willing to commit unless everyone did. Besides what should of happened was that the Danish Champ should have ridden us to a good gap on the peleton and then the rest of us would have been more willing to work, then Pedersen takes Yellow and the rest of us get a chance at the stage. But with highly motivated Russians in Yellow 20 seconds back and 5 languages in a group of 8, we were at a dead end. With 10 km to go things where settled and the best 40 of 190 rode looking for the stage win, myself included. Then I flatted. 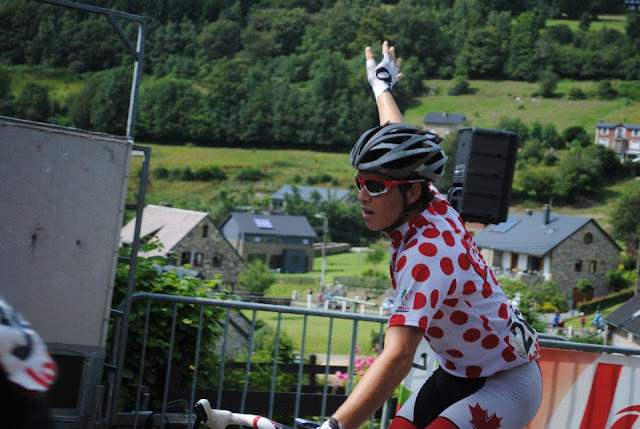 Mavic was there quickly in their trade mark yellow car but I didn't recieve much aid.. I had the wheel out, deraileur dropped all the way down and breaks open before he got out of the car but he didn't know what he was doing and after probably 20 seconds I went in to help. Two people trying to do the exactly the same thing doesn't really work.. so I said "go back in the car". He didn't really listen so I actually had to put my hand on his shoulder and push him away. He seemed upset he was unable to do his job and looked a little dejected as I go my wheel good in few seconds. With some pointlessly hard riding, multiple break adjustments and this nasty little bottle that got stuck to my hand for 300m my break to the peleton stayed the same. 1'07 seconds behind. A little disapointed I didn't get a chance to ride for the win.. it was uphill and being the KOM leader I would of liked to think I had a chance.

After I enjoyed a nice TV interview and the guy from Mavic came to me with tears in his eyes asking for his wheel back. I told him it was okay and he apologized constantly then returned to his car.

Thank you is not enough for all my supporters: Coach Rick, Family, The men @ Spinsanity, Friends at Team CHCH, The Hermans Family for giving me a home away from home and Sport en Steun for allowing me to race with them at such an excellent event!