Tour of the Battenkill

This race was one of my goals for the season. It's easy to say that when you spend all winter inside and it's one of your first races you are doing, but all the same I have some better reasons for it. I love the "classic" style race. I dream of racing Paris-Roubaix and Flanders, but as a North American junior the only real big "classic" race is Battenkill.

Last year I finished 6th. Our hammartia was that we failed to go hard enough to drop the good sprinters and I came in near the back of a 8 man sprint. This time I was not going to make the same mistake! Here is a play by play of what happened on the day.

We started out pretty gently, one kid from farm team racing pulled us at about 40 for the first 8km and covered all the moves which was nice, gives us a break. We then hit some climbs and gravel sections where the pack strung out but due to lack of motivation between sectors we rolled along at a very calm pace. This is when I told my teammates it would be good to get into some moves as getting a big gap now can put you ahead of the carnage when the going gets tough. As we talked about before the race Max, Simon and James all made it to the front on some calm roads and started throwing attacks and covering moves. James did a lot of work early and helped keep the pace high for about 10km of the race. Then about 20km later after the first feed zone Max and Simon got in moves and I did my best (along with the Spidertech Quebec boys who had a rider up) to block for them. Now 50km in the fun really starts.

I had skyped with Rick the night before and we decided if there was a big group on the difficult Cheese Cake section of gravel I'd do a flyer and try to get away in the hilly/technical riding to come. But the peleton charged and pulled me back. Once off the gravel we had a lot of really tired guys and then an attack went. The peleton didn't seem very motivated so I figured I would go under the radar and attack on the flat roads where no one expected it. I bridged up to the two riders and we went for it but it didn't last long. I figured I had drawn a target on my back after my exploits on the last gravel sector. We cruised into the 3rd from last rolling section with about 25km to go and everyone wanted to make something happen, we killed it! I just followed as it was only wide enough for one rider about 8 wheels back. Our group of 50 was suddenly 16 and the racing had begun! A rider infront of me allowed a gap to open and I saw that if they got away now it would take a lot of matches to get back. The gravel in this section was  gnarly and I do not use the "g" word lightly. We were riding through what was practically sand with a few rocks in it and at almost 45km down hill. What a place to need to bridge a gap. I sprinted into the sand, my bike flying all over the place and as the road started to go up again I was back with the 8 leaders.

The next feed zone was with 20km to go and on a nice smooth paved hill, some guys at the front kept going and we popped two guys while at the same time Etzl and 3 other came back after being gapped in the technical gravel part a few km's earlier. We were 10 strong. I had known after talking with my coach that I could not have Etzl with me at the finish because of his deadly sprint so I knew I would have to do something to tire him or even better, get rid of him. The epic Stage Road climb that begins with 11k to go and ends with 8km to go would be my battle ground. I followed a move in 3rd wheel and we split off of the riders behind us. Then on a plateau I shifted into my 52 and started to push the pace. After maybe 30seconds I moved aside hoping to be in a quaint group of 3, but I was pleasently surprised to see I had gapped them. I kept up my pace, not going too hard knowing that they would have to work hard seeing me pull away which would also keep Brandon at bay. I knew how ever unless they were all individuals, a shake and bake descending manoever would leave me helpless with my junior gears. After 3km off the front they brought me back and we rolled through as the winning move of the day of 5 riders as two more had latched on during the descent. 6k to go. I sat out  a few pulls, which was fair due to my time off the front. If they wanted me to do more they could of easily yelled at me or sat up, restoring my fear in Etzl coming back which would of forced me to pull more but they all somehow seemed okay with my lack of patronage to the group's speed. This lasted 4km until someone decided not to pull through. For the next km we slowed to perhaps 30km/h and began to weave across the road like a snake. The guy infront did not want to lead anymore and was swerving, hoping to have someone pull by him. I sat 5th wheel and waited for my opening. As we began to swerve left once more in the fully closed road, last km of race I let a gap open from the last guy to me so I could get a flying start. The small hole to the right of the 4th rider and the sidewalk slowly began to expand and I punched through it full out. 600m to go, Ben vs. 4 guys. I was in so much pain from cramping in my legs and my speed which I managed to hold at 57kmph for nearly 100m started to drop rapidly. I flew around the last corner with about a 50m lead, 350m to the line. I was utterly cooked and they had organised themselves, but two guys began to fall off, they were spent, races over. Leading the charge was the ultra fast, last year's junior USA 15-16 national champion Miguel from Miami. He had ridden the wheels of others until the last corner and now had 350m to close a 50m gap. This is what happened, (notice 3rd 4th and 5th are trunkated and are actully @ 1 and @ 2 seconds back.) 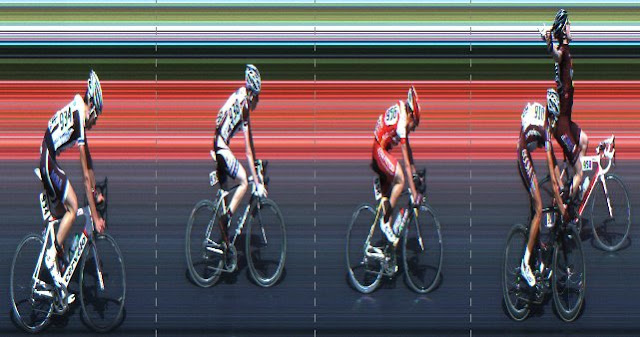 Wow that was close. I probably should have saved the celebration till after the line, just to be safe. 50m to cross.... but sadly Miguel only managed 49 of them. I was so very happy with my win and got a little monai, a pwetty medal and coolest of all a customised bottle of chocolate milk with my name on it!

What comes next for me is the European Spring Project with the CCA! We will be riding some Belgian races and finishing the month long trip with a World Cup stage race in Germany! Exciting times are before me!